The Compass of Hearing is a stainless steel disc created from a digital dataset using a 3D printing process. 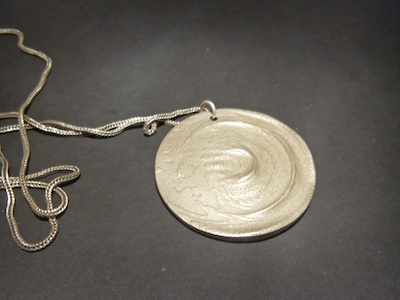 A medallion made from a personal HRTF dataset makes a unique and intimate work of jewellery.

The data was measured from a microphone placed in a the ear canal of a dummy head to measure the Head Related Transfer Functions (HRTF) that characterise spatial hearing. One side of the medallion is an HRTF dataset measured from the left ear, while the other side is from the right ear. The ridges and grooves on the surface are frequency notches that are cues for localising sounds.

Image 1: Visualisation of the dataset (courtesy of Georg Wersenyi)

The physicalisation as a medallion allows you to hold and feel the data set that contains information about spatial hearing from both ears in a single compact object.  The filter functions for sounds from a particular direction can be felt adjacent on the two sides of the medallion. An expert in spatial hearing can carry this data set around in their pocket as an object for contemplation. The medallion allows you to start to ask questions about features such as the regular ridges that appear on the opposite side to the recorded ear.

The construction of the Medallion is described in this paper presented at the ICAD conference in Budapest in 2011.

The HRTF Medallion was curated by Diana Hare for the Embracing Innovation exhibition at CraftsACT in Canberra from 31 March to 7 May 2011.

A physical version of this first HRTF Medallion can be ordered from Shapeways.com at http://www.shapeways.com/shops/umwebejo

One thought on “Compass of Hearing”