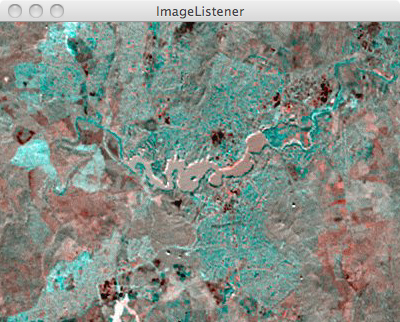 The sonification was developed to support the analysis of changes in the environment captured by satellite imagery. The data consists of the difference in the reflectivity of the ground in satellite images taken twenty years apart. An analyst can click on a visualization of this dataset to hear the sonification of the change at a particular point using the ImageListener

It was difficult to compare differences between different points from the image due to the small size of individual pixels. However the sonification did not solve this problem because it was not easy to remember the sound at the previous point while clicking on another. This problem was solved by looping the sonifications of the two points, which made comparisons much easier.  Similar values produced a sound that was distinct from those that had greater differences. These alternating looped points sounded quite similar to the Van Noorden gallop that is used in experiments on auditory stream perception [Van Noorden, 1977]. This observation laid the foundation for further exploration of the Van Noorden effect in the following case studies. The ImageListener also raised questions about auditory memory related to sonification. How long can we hold a sound in memory? Is it possible to compare two sounds in memory? What is the effect of time on the judgment of difference between two sonified data points? How many levels of quantitative difference can be judged between two sonified points?